My Aunt, Virginia Miller, better known as Aunt Jenny, leaned into her last curve and made it home on Friday, March 28.  On Tuesday April 2, we gathered and gave her a proper send-off.  It was amazing to see how many lives she touched over the years.  Many of them, like me, people who learned lessons from the way she lived her life. She was the third of my mom’s sisters to go home over the past five months.  A great loss for our family, but what a gain for them to be home with Jesus. 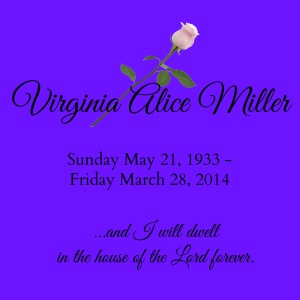 A few years ago I wrote the following essay about Aunt Jenny, but never published it on my blog, or even shared it with her.  I kept thinking I would send it to her and I wish I had, but as with a lot of things in life, we never quite do all that we mean to.  I know she loved her family well, including her nieces and nephews.  I also know we loved her well.  I want to share the story with you today as a way to remember.

Aunt Jenny is the real deal. A bona fide woman of God. She loves Him. She lives by his book. And She trusts him with everything. I know this because I’ve known her all my life. And I know her family. I know where she’s been and I know where she’s going.

I remember one time we were going somewhere and Aunt Jenny was riding with us. She was in the backseat with my sister and me. We were on a curvy road. I don’t know what I said (I was probably secretly a little scared of the winding road), but it prompted Aunt Jenny to remark that the curves weren’t really all that bad; you just had to lean into them. And she proceeded to do just that.

So, here we were riding in the car, leaning into the curves whether we wanted to or not because Aunt Jenny was. At the time I remember thinking the whole thing was a little silly. I even remember my sister and I laughing about it later. In fact quite a few times over the years it sort of became our mantra – just lean into the curves. Wow, how little did we realize how profound that advice really is.

I’ve come to realize that Aunt Jenny’s advice applies to life. Life throws us a lot of curves and it just works better if you lean into them and ride them out. Sooner or later the road unwinds a little and you can breath again.

I think Aunt Jenny probably knew even then that leaning into the curves is a metaphor for living life. She has had a lot of curves to lean into over the years. She has ridden them out well. With grace and dignity. She taught her children to do the same. She still rides the curves with grace and dignity and so do her children.  There is a gentleness about her in her golden years that reminds me of my grandmother. And those who know me well, know that to equate anybody with grandma is the utmost in status.

I saw a picture of Aunt Jenny on Facebook recently that one of her family had posted. It touched a chord deep inside of me. It was taken during a time when Aunt Jenny was riding out a curve in her life. In the picture she is hugging her son, Jeff, and she has such a sweet expression on her face. You can tell she is holding onto him for dear life as if pouring all her love into him. That’s just the kind of woman she is. That picture, for me, tells the story of Aunt Jenny. It shows her strength and her vulnerability. It shows her grace and her trust. It shows the heritage she is building for her children.

Honestly, it is the perfect picture of how God loves us. I just imagine him holding us for dear life, pouring all his love into us and letting us know that he is leaning with us in the curves.

Thanks, Aunt Jenny. I love you.

8 thoughts on “Leaning Into The Curves”